Turmeric has been getting a lot of recognition in the very recent years here in the US due to its powerful anti-oxidant and anti-inflammatory properties. The active ingredient in turmeric root is curcumin, which is what gives curry its yellow color and is used in India and Asia in cooking.

Turmeric is completely caffeine free, which makes it a nice and relaxing beverage in the evenings. The ground turmeric powder can be used to make a delicious latte with a choice of milk and sweetener! Very reminiscent of a chai latte, but with a more zesty/ peppery aftertaste (see recipe below post). 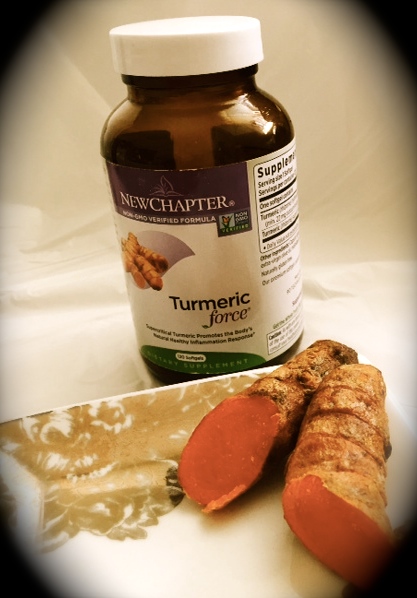 *My complexion has improved dramatically from post acne marks and acne in general since starting to include turmeric supplements from the brand (New Chapter) in the above photo. It detoxifies the liver resulting in clear skin by pushing and eliminating the waste that accumulates in the liver.*

Turmeric has been recognized for preventing cancer cells from growing and forming. Starting on ingesting turmeric is never too early. The wonderful part about turmeric is that it can be ingested through supplement form, drank as tea, or used in cooking.

I take my turmeric in a vitamin form every morning and sometimes seep the actual root in hot water and sweeten a bit with some organic honey for a spicy and sweet tea.

Turmeric can be found in many grocery stores sold as an orange root in the produce section. Some ethnic and Middle Eastern markets carry turmeric as a ground spice to be used in cooking and in preparation of curry dishes. It is also sold in a vitamin/ tablet form.

**Amazon.com carries New Chapter brand at a cheaper price that I recommend and intake daily.

Turmeric started to be used in India over 2,500 years ago; it was originally used as a dye. The healing properties of this spice have been found later.

1 cup almond milk or other milk of choice

On low heat, warm up milk in a small saucepan. Whisk in turmeric and cinnamon until well blended. Do not over boil. Turn off the heat and add some honey (preferably manuka honey), coconut sugar, maple syrup or stevia for sweetness.

If you are pregnant, you should not use turmeric – it can have a stimulating effect, be sure to consult with your doctor. In addition, individuals with a ginger allergy should avoid turmeric as it comes from the same family. The Green Beauty Mademoiselle is your one stop to green beauty product reviews; holistic, balanced lifestyle through diet, supplements, and various nutrient rich foods that will lead to a happy internal and external health! Detoxify your Health; Beautify your Life!

Looking for Something? Search Here

Where I Shop for Discounted Health Products – AMAZON